THE SPECIALS PLUS VERY SPECIAL GUESTS live @ THE PIECE HALL 2021 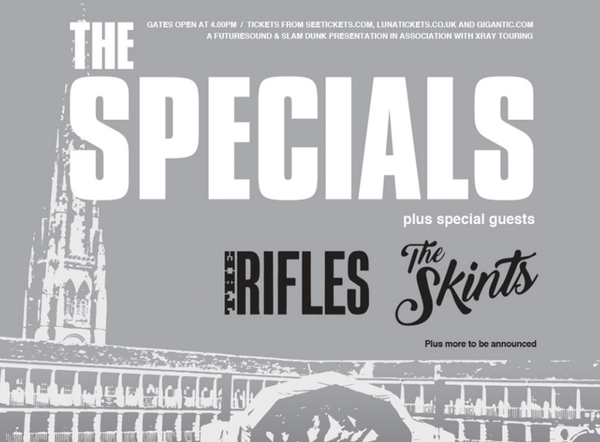 Pioneers in UK Ska, and one of the most influential and seminal acts in British history, The Specials will be coming to The Piece Hall IN 2021 RESCHEDULED due to the corona virus outbreak

Founded in 1977 The Specials were at the forefront of the 2 Tone movement, changing the face of UK music in the 1980s with 7 successive top 10 singles between 1979 & 1981 including number one hits like ‘Too Much Too Young’ & ‘Ghost Town’. The band reformed in 1993 and have wowed fans across the world on the live circuit since, including a huge sold out show at Leeds’ Millennium Square in May 2017. In 2019 the band released ‘Encore’ their first album in 18 years, which gave the band their first ever number one album, 40 years after the release of their self-titled debut.

The Specials bring with them a very special supporting bill that includes Mod Rock Favourites The Rifles, who shot to fame in the mid 00’s, grabbing the public attention with ‘Local Boy’ taken from their debut album ‘No Love Lost’ which reached number 2 in the UK Charts. Ska stalwarts The Skints also join the bill delivering an exciting mash up of reggae and punk, that’s as feel good and soul stirring as it is hard hitting. With more artists set to be announced this show promises to be one to remember, with wall to wall skanking in one of Yorkshire’s most beautiful locations.

Tickets for The Specials plus special guests will go on sale on Friday 15 November at 9am. Tickets are available from www.seetickets.com and www.lunatickets.co.uk

Exclusive pre-sale access for The Piece Hall Trust members opens on Thursday 14 November at 9am for 24 hours only. Members will recieve an email 1 hour before pre-sale begins with details on how to access pre-sale tickets.*

*The cut off for membership purchase to receive priority booking details via email is 10pm on Wednesday 13 November. If you sign up after this time, you will need to ring the Box Office on 01422 525217 to access the pre-sale. Tickets are subject to availability and being a member is not a guarantee of tickets or access to any event.