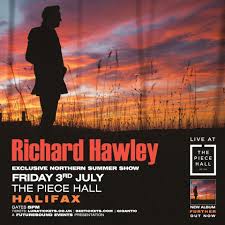 Iconic Yorkshire Musician Richard Hawley comes to The Piece Hall in July 2020 in what will be his only Northern live show of the summer. The show follows a landmark year for Hawley, whose 9th studio album ‘Further’ reached his joint highest charting at Number 3.

In the two decades that have elapsed since Hawley jettisoned band life, first with The Longpigs and then as Pulp’s guitarist, the 52-year-old songwriter has forged one of the most singular and diverse careers in modern music.

As well as releasing a string of solo albums that have managed the rare feat of being both critically acclaimed and commercially successful, Hawley has worked with a host of impressive collaborators – such as Arctic Monkeys, Manic Street Preachers, Elbow, Texas and Paul Weller, alongside personal heroes that include U.S guitarist Duane Eddy (his 2011 album, Road Trip, was co-produced by Richard), Shirley Bassey (for whom he wrote the smouldering ballad, After The Rain, in 2009), Nancy Sinatra, Lisa Marie Presley and British folk royalty Martin Carthy and Norma Waterson (he was an integral part of 2013’s Bright Phoebus Revisited tour). There are also bona fide pop stars such as Robbie Williams, All Saints and Texas, all of whom Hawley has played with in differing capacities down the years. Also, his song Tonight The Streets Are Ours was featured in The Simpsons and Exit Through The Gift Shop: A Banksy Film.

His appearance in Halifax promises to be a special show from a musician that has a knack for creating poignant and powerful songs like ‘Tonight the streets are ours’ and ‘The Ocean’.

Tickets for Richard Hawley plus special guests will go on sale on Friday 8 November at 9am. Tickets are available from www.seetickets.com and www.lunatickets.co.uk

Exclusive pre-sale access for The Piece Hall Trust members opens on Thursday 7 November at 9am for 24 hours only. Members will recieve an email 1 hour before pre-sale begins with details on how to access pre-sale tickets.*

*The cut off for membership purchase to receive priority booking details via email is 10pm on Wednesday 6 November. If you sign up after this time, you will need to ring the Box Office on 01422 525217 to access the pre-sale. Tickets are subject to availability and being a member is not a guarantee of tickets or access to any event.