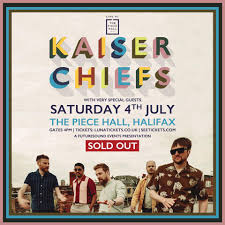 Multi-platinum selling band Kaiser Chiefs are coming home to Yorkshire TWICE in a weekend in 2020! The band hailing from Leeds will be playing their first ever shows in Halifax at The Piece Hall, expect to hear sing along classics such as ‘I Predict a Riot’ and ‘Ruby’.

Having electrified fans with the announcement of the first show on Saturday 4 July which sold out in 30 minutes, Kaiser Chiefs have added a second show on Sunday 5 July due to huge demand.

Not only have Kaiser Chiefs announced a second show but they have also confirmed the full line-up for both days! Joining the Yorkshire heroes will be local-legends in waiting The Sherlocks, inventive indie-pop mainstays Mystery Jets, rising indie-alt stars The Big Moon and local epic-indie rockers Apollo Junction.

The Piece Hall hosted a hugely successful series of live music events in summer 2019 including sold out shows with Mercury Prize Winners Elbow and Halifax Hometown Heroes Embrace, and Kaiser Chiefs is the first in a series of summer events for 2020.

This show brings one of Yorkshire’s biggest selling bands to Calderdale for what is sure to be a spectacular moment since The Piece Hall’s recent rebirth as a unique music venue.

Famed for their incredible live show, Kaiser Chiefs played to over 17,000 fans at Elland Road stadium in June 2019 as part of the Leeds United Centenary Celebrations, before releasing 7th album ‘Duck’ through Polydor Records.

LISTEN TO THE PLAYLIST HERE.