Looking for something to do in Halifax? Whether you're a local, new in town or just cruising through we've got loads of great tips and events to offer. Find out what’s on in Halifax with our regularly updated events calendar featuring the best upcoming events in Halifax and the area.

This guide lists events at a glance, showing what’s on each month. See the highlights of What’s On for Halifax, featuring the best of things to do in Halifax – Live Music and Gigs, Family Events, Art & Culture, Food & Drink and much more. Halifax fundraisers and charity events.

Important This Event Calendar is not maintained on a daily basis and some events may have changed dates or are no longer happening. Please double-check the event websites for the most up-to-date information. 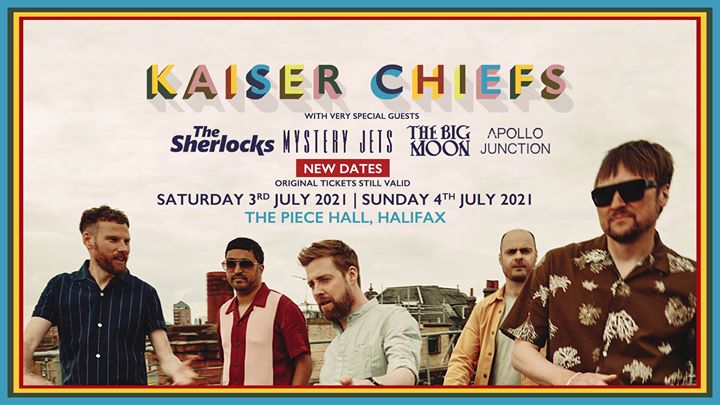 Don’t miss indie legends Kaiser Chiefs at their first ever Halifax headline show in July 2021 at The Piece Hall!

Kaiser Chiefs are coming to the iconic Piece Hall on Saturday 3rd July for their first ever Halifax headline show!

Formed in Leeds in 2000, Kaiser Chiefs are one of the leading bands of their generation. Fronted by the charismatic Ricky Wilson, the band have released 7 studio albums & have a string of anthemic hits such as Oh My God, I Predict A Riot, Coming Home and Never Miss a Beat.

The band have released 7 original studio albums which includes their Mercury nominated debut, Employment which sold over 2 million copies, Its number 1 follow up Yours Truly, Angry Mob, which went twice-platinum in the UK alone and Education Education Education and War which entered the UK Album Charts at number 1. The band returned triumphantly in 2019 with Top 3 album ‘Duck’, which was launched off the back of the huge summer 2019 stadium show at Elland Road Stadium in Leeds.
Check out ‘Duck’ on Spotify: https://spoti.fi/2B516DE

The Piece Hall are running an exclusive venue pre-sale on Thursday 17th October at 9am for 24 hours, find out how to access the pre-sale and get venue information here: www.thepiecehall.co.uk/events/kaiser-chiefs

Information about accessibility can be found here:https://www.futuresoundaccessbookings.com/

If you have an event, that you would like to be featured on our Events Calendar, please visit Free Event Listing.